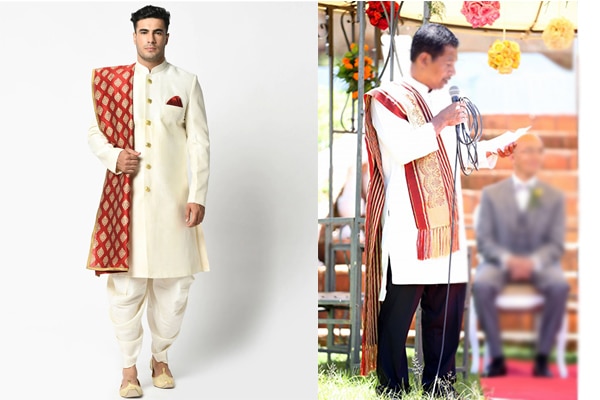 The top male attire during the highlands parties would undoubtedly be the "malabary". All research leads to say that it is a costume of Indian origin which would have arrived in Madagascar just after the abolition of slavery in 1848 in the French colonies.

We can go back to its origin as far as the region of "Malabar", was to be expected, with the Tamils ​​who came en masse for the work of retribution on Reunion Island. Near 200.000 arrived like this for work and also to populate and represent France in certain colonies like Madagascar.

Coming to Madagascar, they took with them some of their culture, among others the Sherwani (large hotpot shirt with pajamas or pants) which became Malabar by simple cultural assimilation and the fact that the French called these Indians, juggling.

The highland Malagasy began to copy the clothes that came from outside and immediately adopted this outfit which differentiated them from the European costumes which were starting to be mocked by their obsolescence.. It comes in different materials but the most popular is undoubtedly the one made of silk., as originally.

Till today, there are still men who wear this outfit with distant origins. It has even become a trendy outfit and even has a good place in the choice of high society men of the Malagasy highlands..